he Lumia 730 gains some impressive additions with its 2014 update, including a removable battery, more RAM for video games, changeable shells, a 720P HD display and improved cameras.

The design of the Lumia 730 is reminiscent of a thinner, light Lumia 920 with a hint of the original Lumia 800 added in for good measure. The device is significantly lighter at just 133 grams (versus a Lumia 920 at 185 grams) even though the display is 0.2-inches larger.

Speaking of the display, with 720P graphics, ClearBlack for deep colors, SuperSensitive Touch and a slight curvature, the Lumia 730 builds nicely off of previous technology, delivering a quality experience for a budget-friendly phone.

Finally, the real selling point of the Lumia 730 comes in its two top performing cameras. The rear camera builds off of the Lumia 720's excellent 6.7 MP design, which was good enough to be used in the Nokia Lumia 2520 tablet later on. With its F/1.9 aperture, the rear camera should deliver excellent low-light performance while still taking sharp images, all without Nokia's famed PureView technology. The front-facing camera is a large 5 MP sensor ideal for Skype calls or so-called 'selfie' shots popular with today's younger crowd. Although 5 MP front-facing cameras are found on other phones, they are usually reserved for flagship devices and not budget-friendly ones meant for younger students or the youth market. 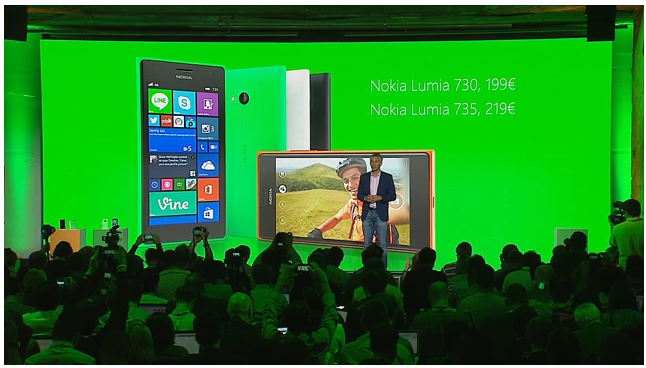 Nokia ‘Superman’ will be the best Windows Phone for selfies

One of the first Windows Phone 8.1 devices due for release after Microsoft’s acquisition of Nokia’s phone business will be focused on the front-facing camera capabilities. Sources familiar with Microsoft’s plans tell The Verge that a Nokia ‘Superman’ device is currently in development with a 5-megapixel camera at the front. Nokia has typically reserved such additions for the rear of its devices, but Superman marks a shift. It’s not clear if Microsoft plans to market Superman as the ultimate selfie-taking phone, but a 5-megapixel camera at the front instead of the standard 1-megapixel offering is no accident. Superman will join HTC's recently released One M8, which also includes a 5-megapixel front-facing camera.

We understand that Superman is designed as a 4.7-inch mid-range handset that’s expected to debut towards the end of the year. Microsoft is also currently working towards two Windows Phone 8.1 updates that will be delivered over the course of 2014. Like previous Windows Phone 8 updates, the pair of 8.1 updates will coincide with new handsets and will be rolled out to existing devices. The first update is tentatively scheduled for June, and Superman is expected to debut alongside the second later this year.


As you’ve probably heard by now, Microsoft will be releasing a new Windows Phone soon that will be targeted right towards the selfie-taking crowd.


Apart from that, Unleash has learned that the Superman will feature a 6.5 megapixel rear camera, 1.2 ghz quad-core processor, 1GB of RAM, 8GB of internal memory, LTE support and a 2200 mAh battery, with a 4.7 inch 720p resolution screen at the front.


As you can tell from those specs, this is going to be a mid-range phone.
Clicar para expandir...