Long before MEGATON!!! there was TRIFORCE!!! Nintendo rumours have always been fuelled by hope as much as by hype, and 1999 was no different. As Zelda devotees faced the horrible prospect of actually finishing Ocarina of Time – seven long years of waiting capped by a brief fortnight of ecstatic gaming – whispers of a hidden quest began to spread. By learning the Song of Sages (or unlocking Dark Link, or finding the invisible chest in the Great Deku Tree, or catching two big fish in a row, or just buying it for 500 rupees, depending on who you asked) you could actually find the Triforce. Suddenly that trio of triangles on the item screen made sense, suddenly there was something to take the sting out of Ganon’s final curses. The dubious screenshots that accompanied the rumours were duly debunked, of course, and nintendo.com apologised for exacerbating the situation with an ill-judged April Fool. The Triforce was officially unobtainable.

There was a reason for the insatiable thirst for that rumour to be true, however, and it’s one that isn’t often talked about. For something that’s popularly recognised as The Greatest Game Ever Made, Ocarina ends on a bleak and hollow note. It’s not something you notice in the jubilation of besting Ganon and watching the celebrations spread across the land. But as you sit, staring at ‘Please reset your Nintendo 64’, the excitement begins to drain out of you and in its place rises something darker. Imagine it. Link,
again a boy, returns to a world ignorant of the fate from which he’s saved it. He’s a hero no one’s heard of, a saviour of a non-existent armageddon. And he’s not a boy any more, although he looks like one. He’s fought and lived as a man, felt his boy-like adoration for Zelda mature as he meets her again in adult form. Where can he go? He has learned on his travels that he doesn’t belong with the Kokiri. He isn’t a forest fairy, he’s discovered, and never was; he’s an orphan abandoned first by his dying mother and now by Navi, who leaves him as he returns the Master Sword to its proper place.
The future that unfolds in your mind once the credits roll is one of the subtlest, densest and saddest stories videogames have ever told.

An odd place to end a game, then, but as a starting point it’s as rich in possibility and atmosphere as Episode IV: A New Hope’s bleak beginning. Link and Epona (for he’s not totally alone) pace through a gloomy forest. The strange path of his adventure has exiled him from his home, and now he’s lost in the strange world of Termina. Everything looks so familiar and yet everything looks so wrong. Then there’s an attack, a theft, a bruising chase and a prank so viciously cruel as to steal the identity from a boy who had nothing else left to hold on to. Of all the moments that have been sanctified as representing 'that Nintendo magic', none has been so tearingly sad as when Deku Link first catches sight of his mutated, dejected reflection.

It’s one of the finest motivations a videogame has ever given a player, and your desperation to recover Link’s true form drives you through the first hours of the game. It’s a necessary blessing – few games have begun with such a daringly off-putting few hours. Getting to grips with Majora’s three-day cycle is one of gaming’s rites of passage. Once you’ve got it clear in your head, it’s hard to imagine how anyone ever struggled with it. But think back and remember how stressed you were as the hours ticked by like minutes (exactly like minutes, come to think of it) and that fifth Bomber kid still eluded you. Thousands of players never went back after those first bewildering 72 minutes, and little wonder. When they’d left off with Ocarina they’d been a superhero – armed to the teeth, dressed up to the nines, health barstretching to the middle of the screen. Now they pick up the same brand name, the same controller, and instead they’re a helpless plant playing a game that they’re guaranteed to lose. But they missed out, the people who let themselves be discouraged. They missed out on something wonderful.

If this were a review, there would have to be talk of Majora’s occasionally wayward camera. It would have to tut over the shortage of ‘proper’ dungeons and lament that Link’s later transformations – to Goron and Zora respectively – aren’t used as fully as his Deku persona. It would express reservations about the series’ reliance on fetch-and-carry quests, on mazes and follow-my-leader. But this isn’t a review, so those concerns can be gleefully sidestepped. Instead, what matters is what Majora got right, and it’s only fair to say that a fair proportion of what it gets right was pinched from its older brother. Once the initial stages of the game are complete, there is certainly plenty of Zelda-ing to be done. Although the four main dungeons aren’t as meatily pleasing as the best in Ocarina, they are home to puzzle rooms and boss fights of a standard few games have since bettered. Mini-games, horseback archery, Skulltulla quests and heart piece collecting – if all you were looking for was an Ocarina add-on patch, there is much more familiarity here than first meets the eye.

In fact, the familiarity allows a better appreciation of the game’s core achievements. No longer reeling from Ocarina’s three-dimensional revolution, Majora gives you time to enjoy the tiny details. To revel in the animated perfection of Deku Link’s pirouette, or the way the imprisoned monkey claps his feet together. To savour the way familiar tunes become warped with a carnival hysteria as the end of the world approaches. And the grandeur of Ocarina’s epic tale is the perfect foil for Majora’s love of the absurd. There’s nothing like an encroaching armageddon to make you appreciate the daftness of scottie-dog races and alien cow abductions.

However, for most, what they remember of Majora is its people. The repeating cycle of three days and three nights allows the game to introduce you to the citizens of Termina in an organic and believable way. Rather than being met by lumps of text or awkward speeches, you find out about people by seeing how they live, meeting them as they circle again and again through the last few days of their lives. Even the most incidental characters – the town guards and the officious Deku traders – let slip little human details which add enormous emotional weight to the game. And, as Link does his rounds, his place in the gameworld changes. At the start, you are the very definition of an outsider, wandering lost and wordless around a strange and uncaring town. By the end, you are privy to everyone’s most personal secrets. You know what they’re going to do next even before they’ve decided for themselves. Saving the world is the easy bit. You’ve done that in nearly every videogame you’ve ever played. In Majora’s Mask you save the world by saving the world’s people, one flawed, fragile and fascinating person at a time.

As your familiarity with Clock Town grows, the real reason for its name becomes clear – the whole town and everyone in it resolves into a giant clockwork machine – and you know every cog. From taking in a sinuous acrobatic performance in the cool night air to sharing Anju’s heartbroken midnight vigil, your actions have the power to mend, change and shape these people’s lives. Just because the game achieves this sophistication simply, with a few well-chosen lines of dialogue and a scrap of elegant animation, it doesn’t lessen its impact. Solving all the subquests and collecting all the masks is the absolute opposite of an empty, 100 per cent complete-a-thon. Instead, it’s a real emotional imperative, and finishing each person’s story makes the game’s final sequence a genuine delight. For a game with such a bleak beginning, it has perhaps the warmest ending ever crafted.

It’s hard to over-emphasise Majora’s emotional achievements. Nine years on, few developers have dared take on the lessons that it teaches about how to handle story and character in games. However, it’s only the beginning of what the game has to teach. There are other essays to be written, on how it should have revolutionised game-saving systems, but didn’t. On how delicately the subquests influence the way the main quests are played (try infiltrating the Pirate Fortress with and without the Stone Mask). On Anju and Kafei and what may be gaming’s greatest love story. On how the game has influenced later Zeldas and how much blame it must bear for unleashing Tingle on an undeserving world. Then there are tales to tell, of frog-collecting and curse-lifting, of spider-catching and fairy-herding, but the best way to discover them isn’t to read information in magazines. Instead, let the game tell you its story, whether for the first time or for a second, third or tenth. Ocarina may have been close to perfect, but Majora’s Mask is twice as revealing – a link to the future as well as to the past.
Clicar para expandir... 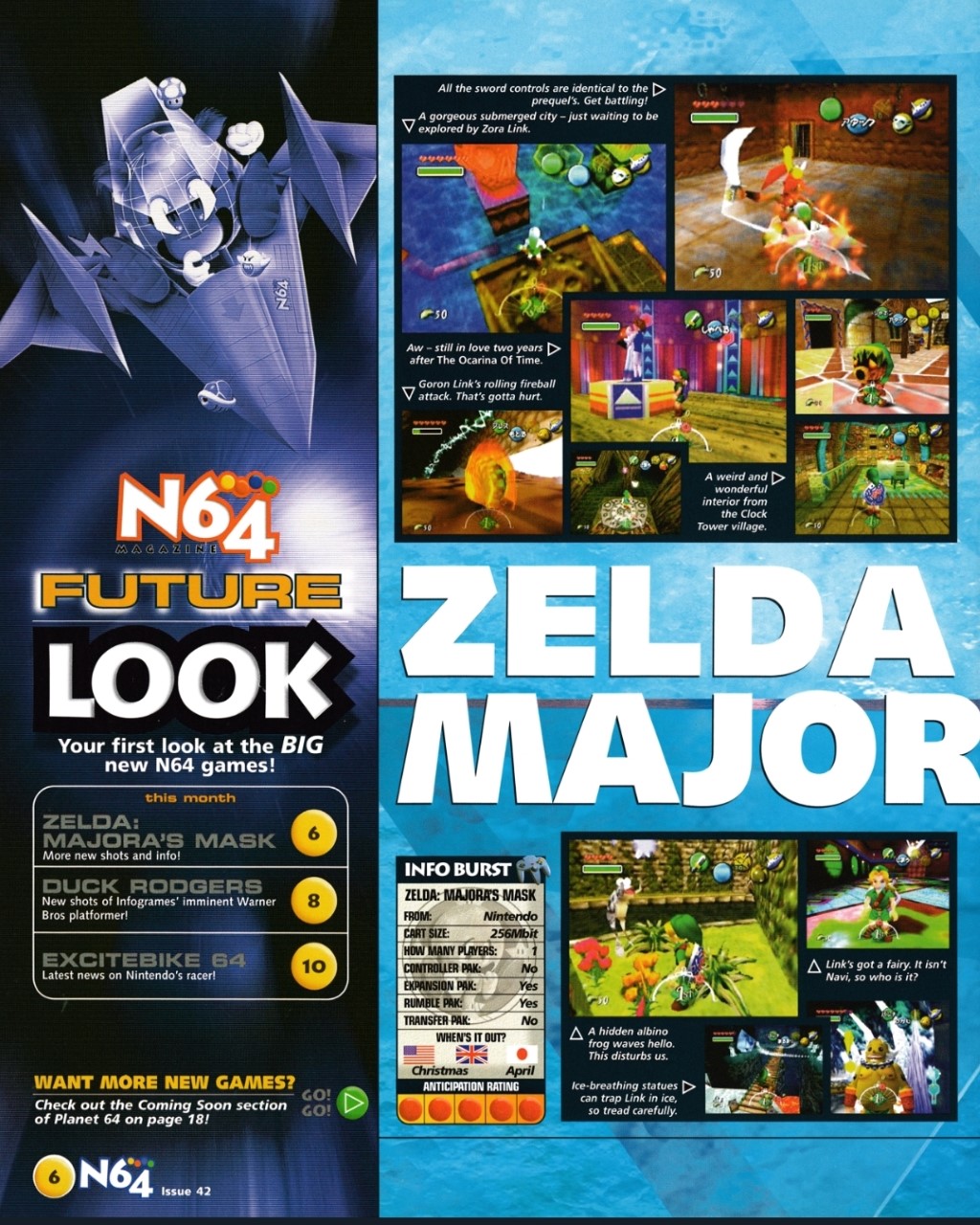 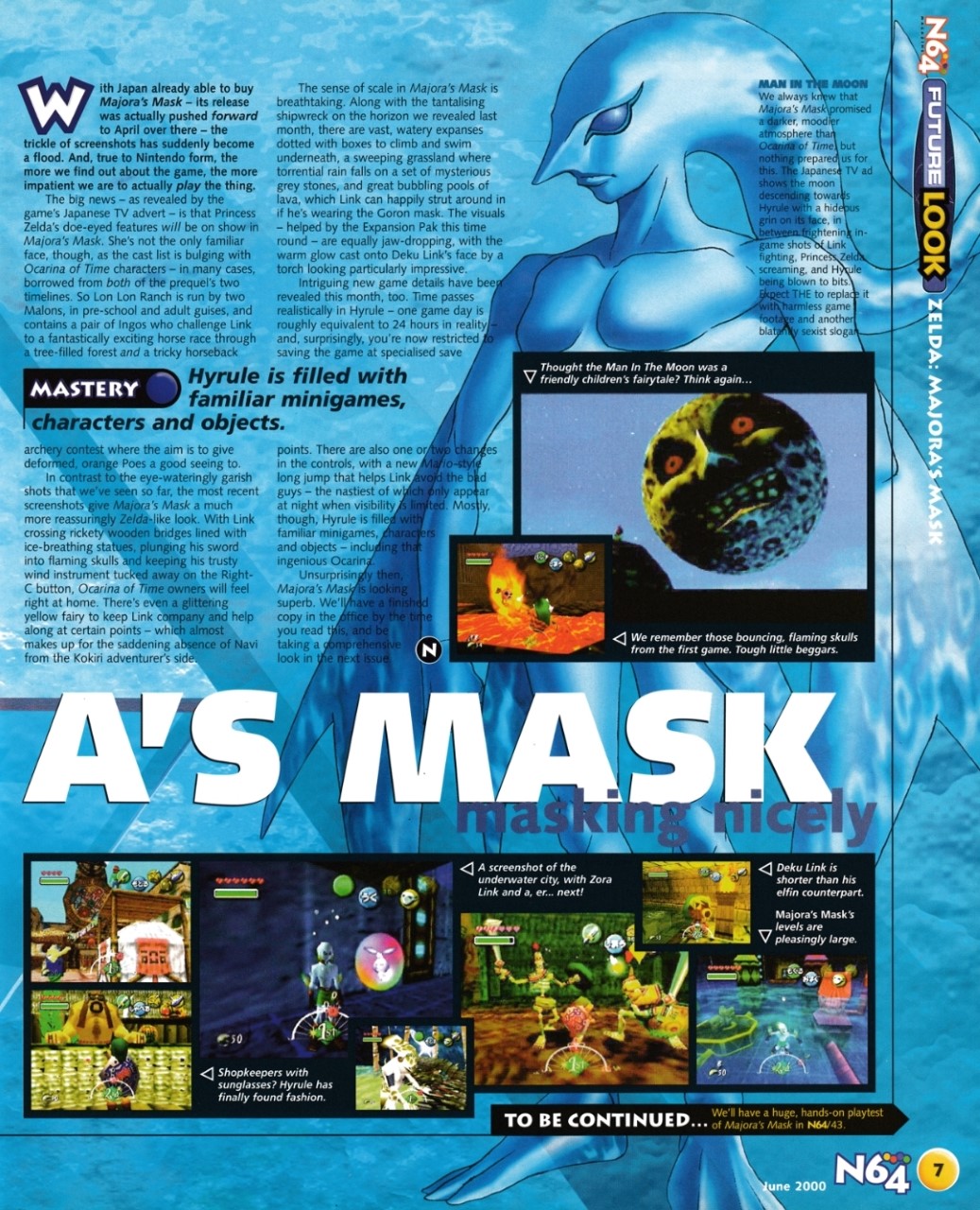 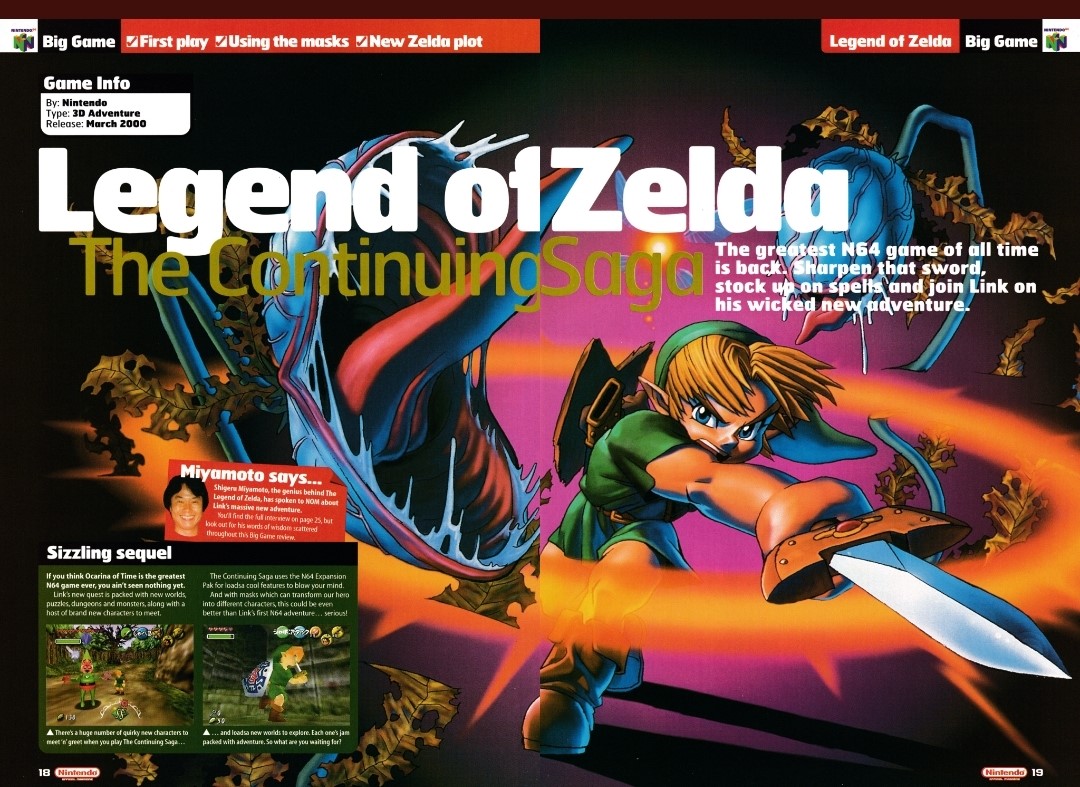 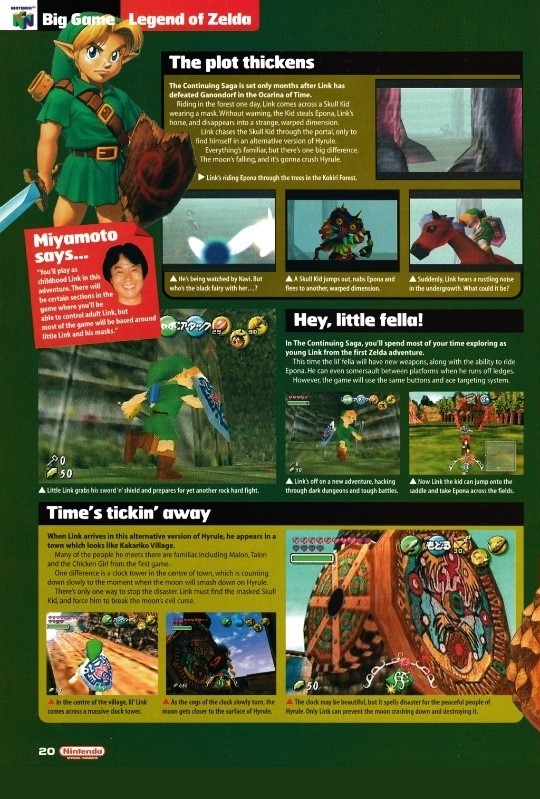 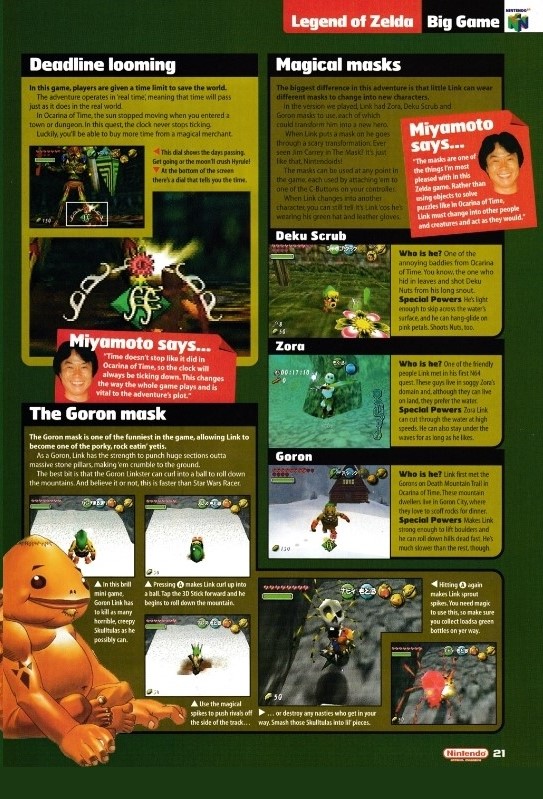 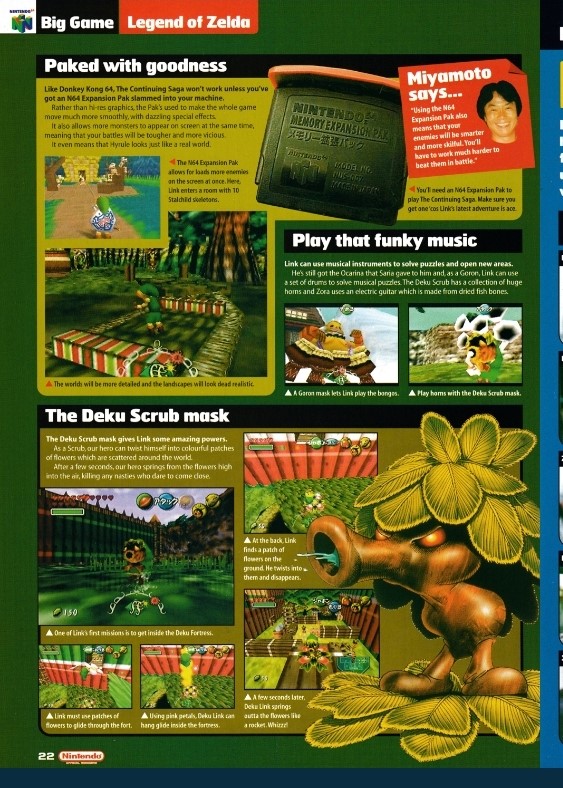 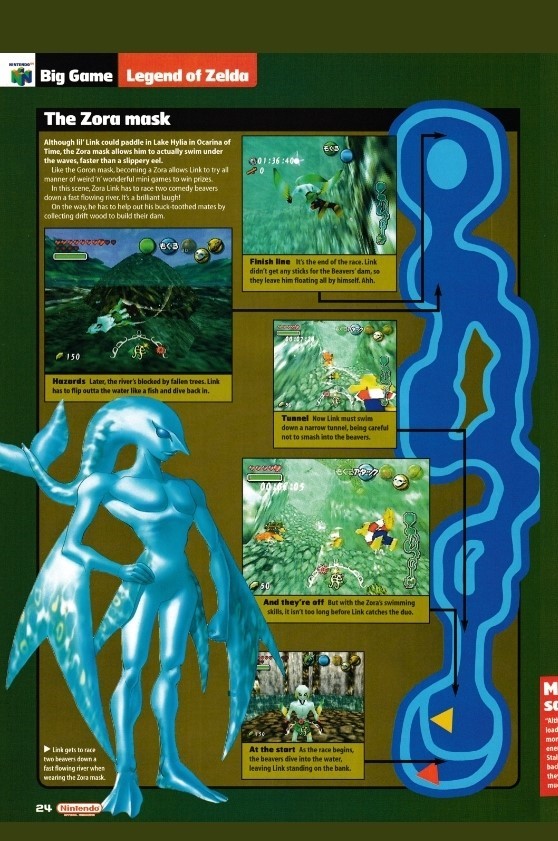 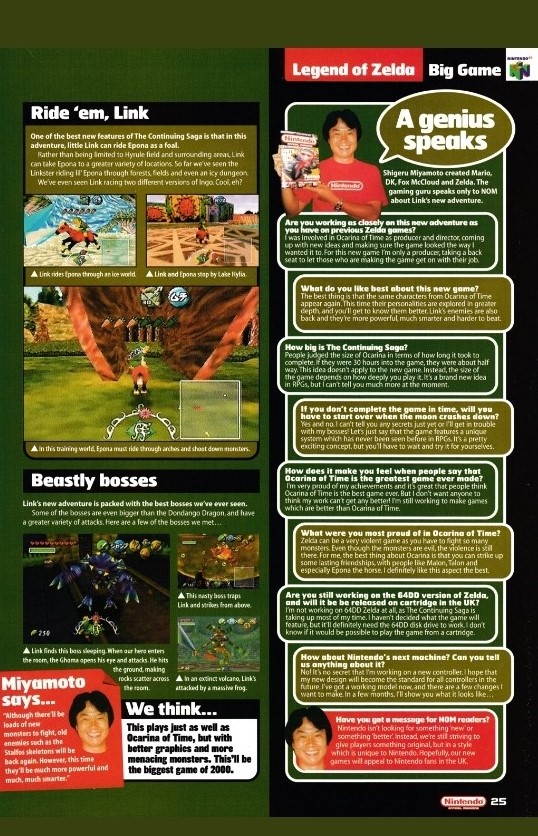