December 12, 2009 - Teased during the opening of Spike's Video Game Award Show, Batman: Arkham Asylum is getting a sequel. The Joker dropped off a giant present for fans in attendance.

No other details, such as a title, were given. But as expected, the location of the sequel may not be at Arkham Asylum as "Arkham has moved" website has been posted, though currently still 404'd.

Based off the trailer shown, it appears the game will take place in Gotham City, or at least certain parts of it. The camera pans through the ruined city streets before making its way through an amusement park, which we can assume is Joker's new hideout.

Developed by Rocksteady, the original garnered universal praise from fans and media. A sequel, while teased early, should come as no surprise.
Clicar para expandir... BTW no poster do site em baixo do "We want you!" poderia ser o two faces 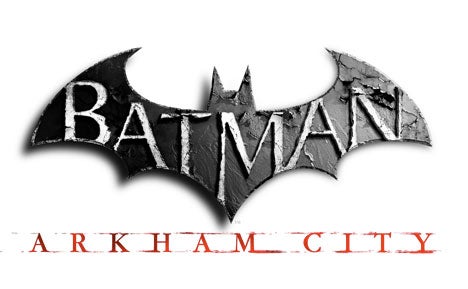 Sharp took credit for getting the Joker situation under control
- Sharp used that incident to help win the election
- He then declares Blackgate and Arkham unfit
- Sharp buys off a portion of the slums of Gotham
- He walls off the area, calls it Arkham City
- Sharp contracts a mercenary group named Tyger into defending the walls
- Prisoners given one rule: “Don’t try to escape”
- Penalty is death
- Prisoners free to do anything besides that within
- People who look into Hugo Strange disappear
- A year has taken place
- Two-Face is admitted into Arkham City
- Two-Face realizes he needs to make a move to assert himself in the prison so that he won’t be eaten alive
- He captures Catwoman, thinking that a public execution would help out his situation
- Devs. want a highly detailed city
- Can use gadgets while fighting
- Example of this: Putting explosive gel on the back of an enemy
- A lot of the super villains have formed gangs, have control of different areas in the city
- Devs hoping to use more of the “forensics” angle from the first title, incorporate puzzles in them that will get more complex as you progress
- Most of the key gadgets unlocked late in the original are immediately available, but it seems it hasn’t been confirmed that all of them will
- Explosive gel, line launcher confirmed to be available by default
- Interrogations instead of Riddler maps now
- Press a button and Batman will taunt enemies
- Optional sidestories for some characters, including Zsasz
- New costume for Harley
- Broadcast analyzer: Mainly used so that Batman can listen to a message from the Joker
- There are several broadcasts Bats can listen to, including the GCPD dispatch and Gotham FM
- Orcacle is missing
- Because of this, Alfred is the one in Bruce’s ear
- Rocksteady not talking about multiplayer plans yet

There’s a lot of new information here, gleaned from a Rocksteady demo seen by the British official mag.

Firstly, there’s the premise. Arkham Aslyum boss turned Gotham mayor Quincy Sharp has fenced off “miles” of Gotham City, filled it with criminals and “thrown away the key”. Their only rule is that they’re not allowed to leave. Aside from that, Gotham’s underclass is left to its own devices. Arkham City’s warden is Hugo Strange, a mystery character to Batman.

The fenced-off area is five times the size of Arkham Asylum. Batman, obviously, doesn’t like it: “He’s been monitoring this place,” said director Sefton Hill. “He’s worried. He thinks it’s a time-bomb waiting to explode into the streets of Gotham.”

Batman’s taken to patrolling AC. The setting is described as “a mix of Tim Burton’s original Batman movie and a touch of Escape from New York,” with spires and graveyards swapped for alleys and streets.

The mag was promised that despite the huge play area, “every nook and cranny has a story.” Also, thanks to distances, Bats will need a way to move around. When asked if vehicles will be included, Warner PR said it’s “something we’ll cover at a later date.#

Fly me to the moon

Wheels or not, Batman can essentially fly this time round. He has a new gadget called a Grapple Boost, which pulls him up and launches him into the air, and can be combined with a new dive which pulls into high-speed, street level flight.

He also now has a second zip line which he can shoot out while using the first: think classic Spider Man.

Hill promised the anti-hero now has new moves for “running across rooftops, blending in, running while grappling, sliding underneath objects” and “jumping between objects.”

Batman can also, “Slide and smash through vents, slide straight into hanging off an edge. You can dive through windows and over railings as well.”

The mag was shown a mission in which Batman needs to rescue Catwoman, as she’s been kidnapped by Two-Face. In it, Bats uses a Grapple Roll and a quick takedown to remove a sniper. He ends up facing 40 enemies at Two-Face’s Courthouse, although Hill promised there would be “bigger fights”.

Basic fighting is “the same,” according to OPM, with combinations of punches, kicks and throws. Additions include the ability to throw back projectiles, launch aerial attacks from walls and windows and unleash “beatdown” flurry attacks. He can also backflip and spray explosive gel on the floor before detonating it to stun opponents.

And get this. There’s a not-so-subtle hint that Catwoman is a playable, co-op character. She uses her whip in the mission in the same way Batman uses his zip line. Hill wouldn’t be drawn when asked directly if she was controllable.

“I’m not allowed to comment on that,” he said.

“Forensics” is something Rocksteady wants to push in the sequel, and Batman will be “solving crimes with multiple bits of evidence.” There are loads of side-stories in the game this time, Hill added, although the developer doesn’t “force you to do those. It’s your choice.”

Harley Quinn was also seen in the demo, as was the more traditional, Arkham Aslyum gameplay of hunting goons from above in closed environments. Additions here include a hanging takedown where Batman throttles a man from above with his legs, and the ability to punch through panels to get to enemies on the other side.

Arkham City is out next autumn for PS3, 360 and PC
Clicar para expandir...

- There are special moves that can hit up to three enemies at once
- Batman will have new air attacks, one of them involves Bats hanging by a cord and jumping over the enemies and disarming them. You can return to the starting point of the jump or carry on with the fight. There is also a diving Swivel which hits two enemies to once.
- Batman now has special combat moves (or terminators), one of them is called "Fallen," a combination of quick punches with a vertical kick that launches the enemy into the air allowing Bats for a second aerial shot. Also there will be others attacks where Batman combines combos and equipment to take out foes.
- Batman will be able to climb all objects, climbing on buildings, including wires (Batman will be able to balance on them) something similar to what was seen in the Assassins Creed II, you will be able to slide underneath objects, cling to poles, rods or perform gymnastic maneuvers and also slide down ramps to grab an enemy. You are also able to get a flying start by leaping through windows.
- Batman now has a feature where he can dodge projectiles shot from firearms, it can also be used for normal attacks.
- Batman will be able to grab enemies mid flight.
- When Batman is soaring, if you go toward a window he performs a motion diving with his feet to smash the window and execute a surprise attack
- Batman can now run and use gadgets at the same time, you can also run, jump and hit at the same time. Batarangs can be thrown even when Batman jumps into the air.

- New gadget that upgrades Batmans "leap" (Translation is confusing but it seems to suggest some sort of cape upgrade that expands into wings, can also "attack enemies")

No Batmobile in Arkham City ( No need - Bats is "the ultimate vehicle." )

Hoping for a bit of Batmobile action in the forthcoming Batman: Arkham City? Tough luck - there are no vehicles in the game, developer Rocksteady Studios has revealed.

Speaking to GamesTM, as reported by fan site Arkham City, the game's director Sefton Hill explained "There aren't any playable vehicles in the game. What we've really focused on is Batman himself. We see him as the ultimate vehicle."

Precious little info has seeped out so far regarding the much anticipated follow-up to the ruddy brilliant 2009 blockbuster Arkham Asylum.

We know it's set in an anything-goes mad house in the centre of Gotham City, that Catwoman and Two Face are getting in on the action and that The Joker is back on the scene, but that's about it.

Alas, there's a bit of a wait before we'll find out much more – the game's not out until Q3 2011. To stave off the hunger pangs in the meantime, why not check out the teaser trailer below.
Clicar para expandir...